Settlement in houses is often confused with subsidence and although they both mean the downward movement of parts of the house, or indeed the entire house. How that movement is caused is what differentiates settlement from subsidence.

What causes Settlement in Houses? 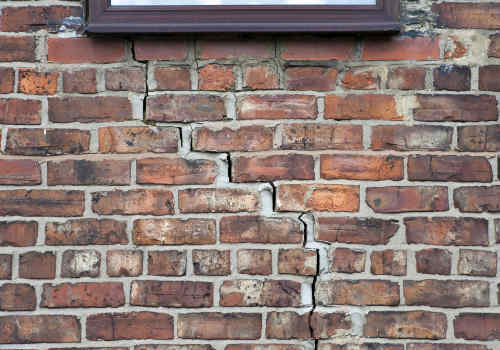 As said above settlement is caused by the failure of an element in the structure of a property and the most common causes in Northern Ireland are failures in foundations or floor slabs.

The failure can be caused by many things from inadequate compacting or specification of underfloor fill, water washing away supporting material beneath the foundations to inadequate foundations etc.

What can it mean to your house?

settlement in houses is a serious issue with potentially large financial implications. If you need to repair or strengthen the foundations imagine how hard it would be to pick up the house, then repair or replace the foundations and then set the house back on top of the foundations. Now you’ll be able to appreciate how expensive it can get.

It is possible that visible cracking could have been caused by historic settlement with no sign of ongoing movement. Possibly because the problem has been repaired in the past but the cracks remain. Which is where getting a survey can pay dividends, as your residential surveyors experience can potentially save you thousands of pounds.

It Doesn’t Matter, I’ll be Taking Out House Insurance:

If settlement goes un-noticed during the buying process it’s likely to cost a lot of money to put right and it’s very likely that your house insurance won’t cover it, unless it happened during the period of cover (i.e. since the date that you took out your insurance policy).

So if you move in and take out an insurance policy and then find that there’s settlement that occurred before you took out your insurance you’re unlikely to be covered.

Need a Survey?
Get a Quote Now
OR
Request a Call Back to discuss your requirements:

The difficulty for your residential surveyor is trying to establish which symptoms and cracks are natural and which are caused by a significant problem that requires immediate attention. But that’s what you pay us for!

If you’d like us to provide you with a residential survey in County Antrim or County Down please request a call back and we’ll call you to discuss your requirements.

Request a Call Back